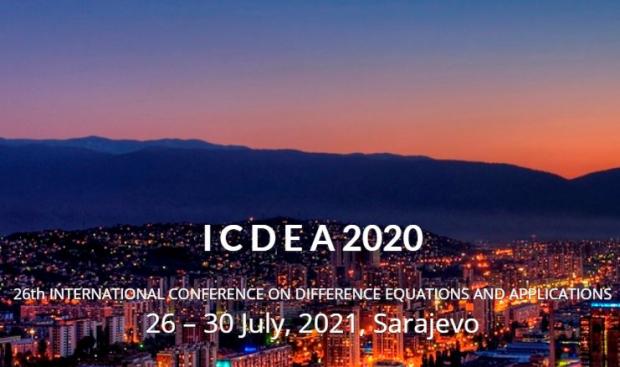 It is with great pleasure to inform the academic community of Bosnia and Herzegovina and students that the 26th International Conference on Difference Equations and Applications (ICDEA 2020) will be held at the University of Sarajevo, School of Economics and Business on Monday 26th July-Friday 30th July 2021.

The main aim of ICDEA 2020 – the official meeting of the International Society of Difference Equations (ISDE) - is to bring together highly-reputed mathematicians as well as researches and students interested in the theory of difference equations and discrete dynamical systems and their applications to science, engineering, economics, and relevant disciplines.

The conference is organized by the Department of mathematics, University of Sarajevo, Sarajevo, Bosnia and Herzegovina, Mathematical Society of Canton Sarajevo under the auspices of the International Society of Difference Equations.

The plenary speakers are:

The conference will also have few special sessions on various themes of difference equations and discrete dynamical systems and their applications.

The Conference is going to be held in Sarajevo for the first time!